Rich people think a certain way that is almost contradictory to the poor. I know, because I was poor and I know how they think. I’ve been rich too and I know how they think. Last year I wrote a book called, The Power of Beliefs – 7 Beliefs that will change your life where I compared the thinking between the two. I’ve included an image that gives you an idea of the contrast.

For example; when it comes to ‘money,’ the rich will invest it while the poor aim to spend it or save it. One of the biggest differences in my view is found in the context of ‘wealth.’ The rich ‘leverage’ their efforts, while the poor simply focus on their ‘self-efforts’ to create wealth.

This idea is found in the rich using ‘Other People’s Money’ or ‘OPM’ vs using their own money and disrupting or sacrificing their all-important cash flow. For example; one of the biggest reasons people go broke is due to insufficient cash flow – it’s that simple. They just run out of money before the idea takes off. So using other people’s money makes a lot more sense – or should I say ‘dollars!’

What is your promise? Is it salable?

Rich people will often start a new venture by selling the promise of a new idea to others who will buy the promise at a price. In other words, imagine starting a business with no money down – not yours anyway. Your idea becomes low risk because you are using OPM.

I realised this many years ago when I had an advertising agency that was being financially battered due to the ‘recession we had to have’ in the 1980s. I was running out of cash fast as my clients were going broke and parking their debts with us. It’s called, ‘bankrupt.’ They simply said, “Barley Charley, it’s not my debt, it’s yours now!” And as more and more of our clients declared bankrupt, we went deeper and deeper into debt. I can’t tell you how many companies still owe me twenty-cents in the dollar or less. We never saw the money as it quickly disappeared after the liquidator or the Government claimed their share. I however soon realised, that I still had a business that was creating cash-flow, and without the debt was actually worth something. So I sold the promise of future profits to someone who wanted out of the corporate jungle (only to create their own) and I was no longer in debt. In that year with the new energy of my business partner, we grew by over 3,000 percent.

To think richly is to think like the rich. The rich know their values and so they know their value. All my life I have created value from thin air. I can bootstrap a business just on an idea alone. Just recently I realised that people needed to shift their mindset before they can shift massive incomes into their bank balances. So I carefully designed a 90-Day program to help change people’s mindset from poor to rich – I called it, “Rich Mind Rich Life 90 Day Program.” Then I priced it so that it had massive value at a small price and within days we had hundreds of participants from as far as Saudi Arabia to China to Australia. In just days of attending we already gained some brilliant testimonials from people who already amassed what appeared like magical results.

It is true that you will only create what you believe you can. To create a rich life, you must have a rich beliefs which in turn is a rich mind. You cannot gain wealth or fortune with a poor mind. 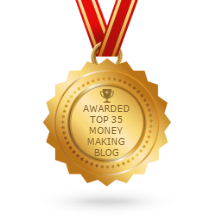 Voted by Feedspot as one of the Top 35 Money Making sites on the web.

Sign up with My Making Money Magazine to get the secrets of financial independence delivered free to your inbox.